Termination and set-off of a loan agreement: who, when and how?

Termination of a loan agreement and conditions of set-off in case of assignment of the claim.

Two companies (A. AG in Switzerland and B. Inc. in Seychelles) entered into an agreement in 2006 wherein A. AG borrowed approx. EUR 4,000,000. The loan was to be repaid on 31 December 2016 with interest payments accruing annually from 31 December 2008. The interest rate was 3.5% per annum with an additional 2% interest rate applied to sums in arrears. A. AG failed to make timely interest payments, leading B. Inc. to terminate the loan agreement in March 2016 and initiate debt collection proceedings in Switzerland.

Meanwhile, B. Inc. borrowed USD 15,000,000 from I. & Co., a Scottish company. The contract could be terminated at any time by giving three months’ written notice. In 2017, I. & Co assigned part of its claim (USD 6,000,000) against B. Inc. to A. AG. The latter did not terminate the agreement or claim repayment of the monies. Ultimately, I. & Co. was the only party to file a declaration of termination, which it did nearly two years after assigning its claim to A. AG.

This situation can be graphically represented as follows: 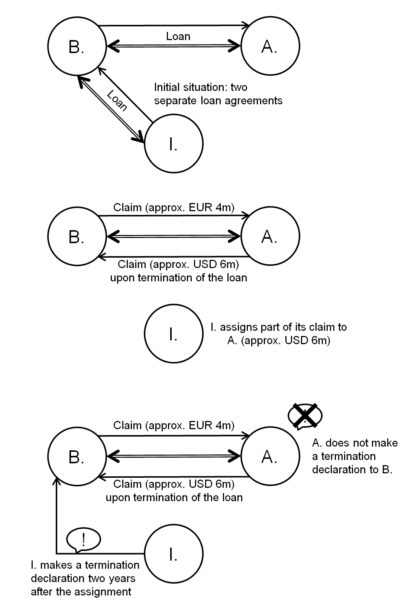 During the debt collection proceedings, A. AG declared that it had offset its debt to B. Inc. with the assigned claim. However, both the court of first instance and the court of appeal (the Cantonal Court of Zug) rejected this argument by holding that A. AG had not terminated the assigned loan agreement and that, as a result, the claim had not become due and could not be used to offset the debt.

A. AG. appealed the decision of the Cantonal Court before the Federal Supreme Court.

The Federal Supreme Court was called upon to decide whether I. & Co.’s termination and A. AG’s set-off declarations were sufficient to settle B. Inc.’s claim by way of set-off.

AG challenged the decision of the Cantonal Court on three distinct grounds.

1. AG first claimed that the declaration of termination made by I. & Co. was valid and opposable to B. Inc. Even if I. & Co. was not the owner of the claim against B. Inc., it could be implied from the circumstances that I. & Co. was acting as a representative of A. AG., as evidenced in the wording of the termination letter where I. & Co. claimed “the repayment of any sums paid under such agreement”. However, according to the Federal Supreme Court, mere awareness of the assignment was insufficient to consider that B. Inc. should have implied an agency relationship or a termination of the assigned part of the loan.

2. AG further contended that the set-off declaration implicitly terminated the loan agreement. The Federal Supreme Court rejected this view, as the contract required terminations to be drafted in a specific form (“[…] executed in writing and sent by facsimile and hand delivered […]”). These requirements were not met in the case at hand and, indeed, could not be met in case of an “implicit” termination given that – by definition – such termination would not have any form. As the termination was not effective and the claim was not due, the set-off declaration was not valid.

3. Finally, A. AG alleged that the three months’ written notice only applied for the full amount of the loan (USD 15,000,000), and not for a partial loan such as the one in the case at hand. The Federal Supreme Court dismissed this argument with reference to the relevant clause, which stated that “The Loan shall be repaid by the Borrower in full or in part at any time upon receipt of at least three months’ notice from the Lender” (emphasis added). In any case, immediate termination would not have been possible as, under Art. 318 of the Swiss Code of Obligations (SCO) and absent any provision to the contrary, a loan must be repaid within six weeks of the first request by the lender, and is not discharged immediately (Art. 75 SCO).

In conclusion, the Federal Supreme Court dismissed the appeal and affirmed the decision of the Cantonal Court.

Any party relying on a declaration should ensure that the declarant had ownership of the claim or was a representative of the owner, and that the contractual requirements – if any – are met.

However, these general rules cannot be relied upon too heavily, as there is no certainty as to which interpretation the courts will make, and because it takes place months, if not years, later. In case of doubt – such as in the case at hand – confirming the declaration and making sure it meets the contractual requirements in order to ensure the effectiveness of the termination is an easy fix.

Other sources discussing the case

Reproduction authorized with the following reference : Grégoire Geissbühler , "Termination and set-off of a loan agreement: who, when and how?", published on: Swiss Contract Law, April 5, 2021, https://swisscontract.law/4/

Unilateral termination of a long-term IT contract: when is… by Malak El Addal 16 August 2022

Arbitration or state courts? The material limits of an… by Michel José Reymond 30 March 2021

Bona fides in negotiating: how disingenuous can one be? by Tanja Schmidt 18 January 2022

Smoke on the characterization of the contract

The limits of unilateral choice of forum clauses

Breach of an exclusivity obligation in a M&A advisory contract: no liability?

Unsuccessful claims of a former distributor: no indemnity for goodwill and no set-off of counterclaims